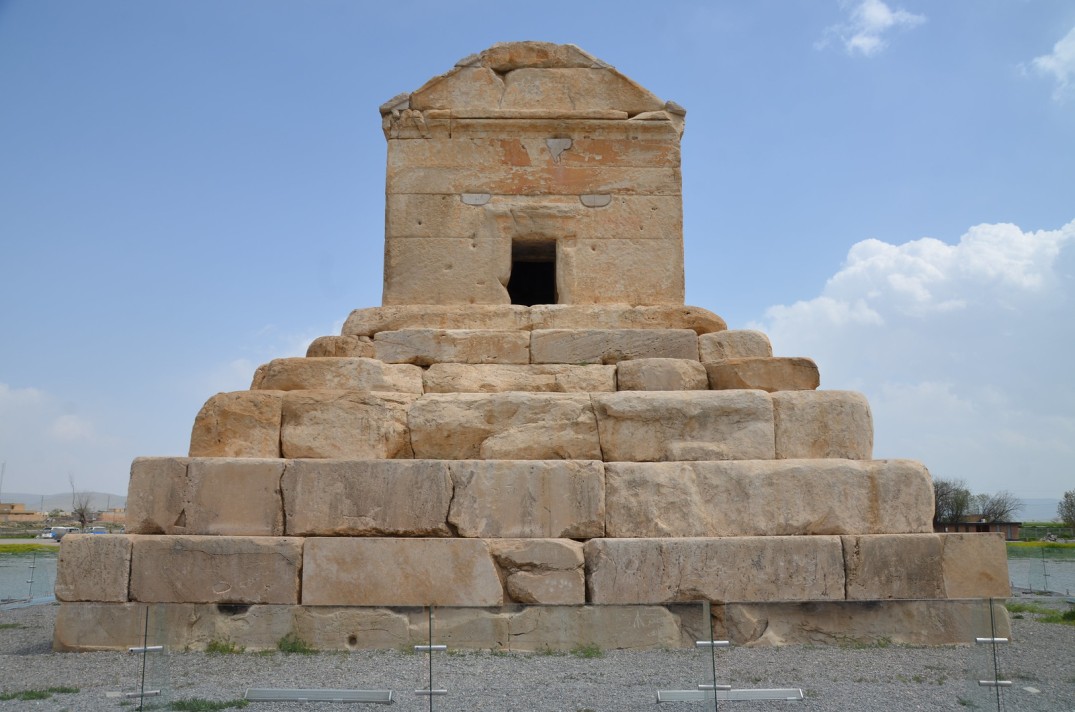 Situated in about 50 km northeast of Persepolis, Pasargadae was the earliest capital of the Achaemenid Empire. The city was founded by Cyrus the Great in the 6th century BC in Pars, the heartland of the Persians (today the province of Fars in southwestern Iran). Its palaces, lavish pleasure gardens, as well as the Tomb of Cyrus, constitute an outstanding example of royal Achaemenid art and architecture. Pasargadae remained the capital of the Achaemenid empire until Cyrus’ son Cambyses II moved it to Susa. The site was designated a UNESCO World Heritage Site in 2004.

According to tradition, Cyrus the Great, the first great Persian king who reigned from 559 to 530 BC, decided to build his capital on the exact same spot where he defeated the Median army led by Astyages in 550 BC (Strabo, Geography, 15.3.8). The city was created with contributions from the different people who comprised the first great multicultural empire in Western Asia.

Pasargadae’s most famous monument is the tomb of Cyrus the Great, located approximately 1 km southwest of the palaces of Pasargadae. The monument measures about 13 x 12 metres and consists of a modest rectangular burial chamber perched on six-tiered plinths. The tomb chamber is 2m wide, 2m high, and 3m deep, and once contained a gold sarcophagus. The design inspiration is variously credited to the Elamite ziggurats of Mesopotamia, but the cella is usually attributed to the funeral monuments in Urartu.

The ruins of Pasargadae are much less well preserved than those of Persepolis. The ruins are dispersed over a wide area that covers 160-ha across the plain. They include a structure commonly believed to be the tomb of Cyrus, the fortress of Toll-e Takht sitting on top of a nearby hill, and the remains of two royal palaces; Audience Hall (or Palace S), Residential Palace (or Palace P) and landscaped gardens.

The ‘Residential Palace’ is usually regarded as the residence of king Cyrus the Great. It is composed of a central hall of five rows of six pillars flanked, flanked on two sides by long porticoes. ‘I am Cyrus, the Achaemenid King’ reads the cuneiform inscription on a pillar. About 250m away is the ‘Audience Hall’ which was identified by archaeologists as a reception hall surrounded by porticoes on all four sides. Unlike the palaces of Persepolis which had a square plan, both buildings at Pasargadae were oblong structures. Standing at the eastern edge of the palace vicinity is a large building which was used as an entrance hall (Gate R) that must have looked like the Gate of All Nations in Persepolis. The gate consisted of a rectangular columned hall with two opposite monumental doorways on its long axis and two side doorways on its cross axis. One of the doorways is notable for its decoration; a unique sculpture, 2.7 metres high, representing a four-winged genius wearing an Egyptian crown.

Pasargadae provides the earliest example of the Persian “Chahar Bagh”, a traditional and sophisticated form of Persian Gardens. A sophisticated irrigation system was created to bring water, and thus turn those dry lands into an earthly representation of heaven. Today, the gardens are hard to discern, but the water channels that were fed with water from the Pulvar River still run along the palaces.

About 250m north of the Cyrus’ palace are the remains of a tower, known locally as Zendan-e Soleiman (Prison of Solomon), that closely resembles Ka’ba-ye Zartosht, an Achaemenid era cube-shaped counterpart standing in the necropolis of Naqsh-e Rostam near Persepolis. The structure consists of an almost square tower standing on a plinth of three steps. A flight of twenty-nine stone steps originally led to the single chamber in the upper half of the monument. On the hill beyond is the Tall-e Takht, a monumental 6000-sq-metre citadel used from Cyrus’ time until the late Sasanian period.