The Karakuş Tumulus is a funerary monument (hierothesion) of the Commagene Royal Family, located in the Kahta district of Adiyaman Province in Eastern Turkey. Like nearby Mount Nemrut, the Karakuş Tumulus is an artificial mound, albeit on a more modest scale. It was constructed by Mithridates II of Commagene ca. 31–20 BC as the last resting place of his mother Isias, his sister Antiochis and his niece Aka I, offering evidence of the importance that the Commagene Kingdom placed on women.

The tumulus, about 25 m in height, was originally encircled by three groups of three limestone Doric columns, one group to the north-east, one to the north-west and one to the south. Each column was about 9 m high and was topped with steles, reliefs, statues of a bull, lion, and an eagle. They were composed of six limestone blocks and a low Doric capital, and stood on a heavy square plinth.

From the group on the south side of the tumulus, only one column has survived. It consists of 7 drums and is topped with a 2.54 m high statue of an eagle which gave its name to the place (in Turkish “karakuş” means “black bird”). From the group on the north-east side, two of the three columns still stand upright. On top, one bears traces of a relief, and the other has a bull whose head has not survived. The central column is slightly higher than the left-hand one and bears an inscription in Greek saying that King Mithridates II erected this hierothesion for his mother Isias, his sister Antiochis and her daughter Aka. Skipping a couple of phrases where restoration has been doubtful, the inscription reads:

This is the hierothesion of Isias, whom the great King Mithridates, she being his own mother, deemed worthy of this final hour. And […] Antiochis lies herein, the king’s sister by the same mother, the most beautiful of women, whose life was short but her honours long-enduring. Both of them, as you see, preside here, and with them a daughter’s daughter, the daughter of Antiochis, Aka. A memorial of life with each other and of the king’s honour.

From the last group on the north-west of the tumulus, only one column is still standing with a dexiosis relief of King Mithradates II and his sister Laodice shaking hands in a farewell gesture. Laodice is wearing a Greek chiton, and her head is veiled with part of her mantle. Mithradates is dressed in oriental style, with trousers, a long mantle, and a tiara. Next to the column, a head of a lion lies on the floor. The grave chamber, located inside the tumulus, was later plundered. It is believed that the stone blocks were reused in the construction of the first Cendere Bridge. 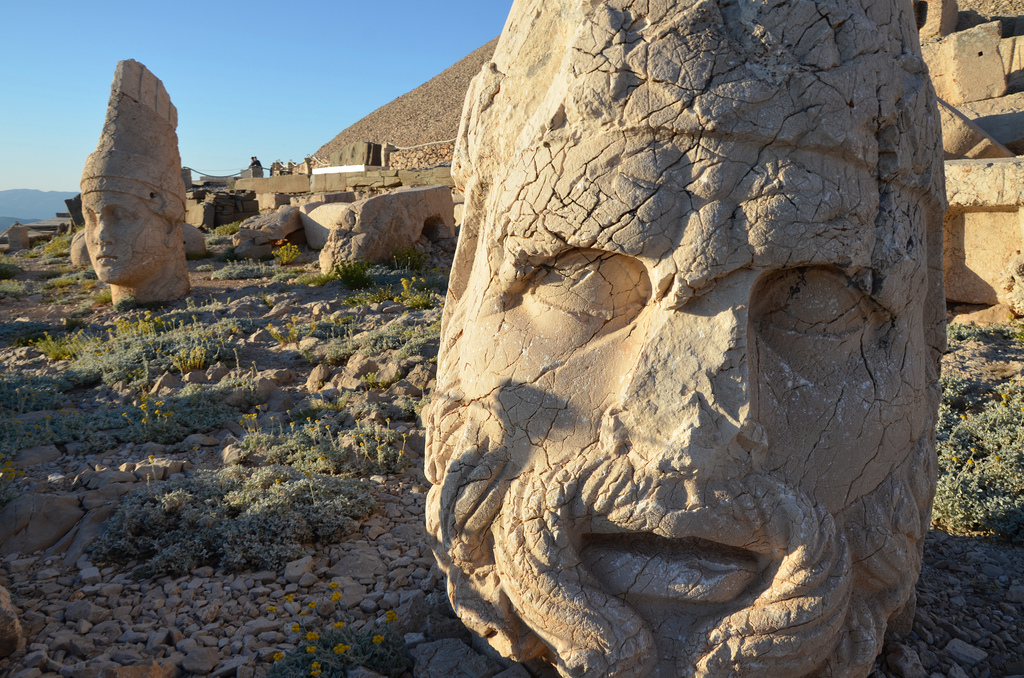 Mount Nemrut is home to the fascinating burial complex (hierothesion) of King Antiochus I who reigned in the 1st century BC over Commagene, a small kingdom founded north of Syria and the Euphrates after the breakup of Alexander The Great’s empire. Located within the Nemrut Dağı National Park, approximately 75 km east of Adıyaman, Mount Nemrut is one of Turkey’s prime tourist attractions where most visitors come to experience the pure magic of the setting at either sunrise or sunset. The hierotheseion of King Antiochus I is one of the most ambitious constructions of the Hellenistic period, and was thus inscribed on the UNESCO’s World Heritage List in 1987 and was established as a National Park the following year.

The hierothesion of King Antiochus I is 50-meter-high man-made burial mound situated upon the peak of Nemrut Dağ within the Taurus mountain range of South-East Turkey, over 2,150 m above sea level. The site was rediscovered in the early 1881 by Karl Sester, a German engineer assessing transport routes for the Ottomans, who reported the discovery of a large number of colossal statues, which he believed to be Assyrian in origin. Systematic excavations followed in the mid-twentieth century by Friedrich Karl Dörner, who worked collaboratively on the site with Theresa Goell, an American archaeologist who devoted herself to the excavation of Nemrut Dağı.

The monumental tomb is dated to the latter part of Antiochus’ reign, c. 50-36 BC. The sacred complex area of about 500 square metres comprises of a 50 m high cone-shaped tumulus flanked by terraces on its north, east and west sides, and a stepped altar. The body of King Antiochus is thought to have been buried in a chamber beneath his man-made mountain, but despite repeated attempts, his tomb has yet to be found.

The East and West terraces had colossal seated statues as well as rows of relief stelae (orthostates). The statues have been identified as Antiochus I and a pantheon of Greek, Armenian, and Iranian. The East Terrace is the best preserved and features mostly intact torsos with their heads placed in front. This terrace consisted of a high podium with a row of five colossal enthroned figures flanked at each end by eagles and lions intended to protect the sanctuary. The five enthroned figures depicted King Antiochus I and four tutelary gods: Zeus-Orosmasdes-Ahura Mazda, Artagnes-Bahram-Heracles-Ares, Apollo-Mithras-Helios-Hermes, and Commagene-Atargatis-Juno Dolichena. On the back of these statues, Antiochus ordered the inscription of a long text in Greek (nomos) which included historical and legal aspects regarding the hierothesion and the establishment of the new cult. A row of now badly damaged sandstone orthostates depicting King Antiochus’ ancestors once lined the northern and southern sides of this terrace. A square and stepped altar platform is located on the east side.

The West Terrace had the same features as those displayed on the East Terrace but was considerably narrower than its eastern counterpart and had no main altar. It is now also more damaged, although the colossal heads are better preserved. The order of the enthroned statues, this time facing the setting sun, are identical to those of the east terrace. The orthostates depicting King Antiochus’ ancestors are also much better preserved. The West Terrace is completed by five reliefs depicting Antiochus shaking hands (dexiosis) with each member of his pantheon. It also included the famous ‘Lion Horoscope’, a relief depicting a lion with stars on his body (probably the constellation Leo) and a crescent moon on his chest. It has been argued that the scene might represent a kind of horoscope, one of the oldest known in the world. Recent research has shown that the lion slab may reflect the situation of the skies at special moments of the year 49 BC when the construction of the monument might have started. The dexiosis reliefs and the Lion Horoscope have been removed from the site and are stored in the Adıyaman Archaeological Museum.

The North Terrace is the least spectacular, and it was probably never finished as the stelae lying nearby are all unworked, bearing no inscriptions or reliefs. There is also no statue. Some scholars have advanced the possibility that this terrace was allocated for the use of kings who would take the throne after Antiochus.

There are several other important sites in the vicinity of the famous mountain of Nemrut Dagi. These include the Karakus Tumulus that served as the burial place of the female members of the royal dynasty of Commagene (Isias, Antiochis and Aka), the remains of Arsameia on the Nymphaios, where Antiochus built a hierothesion for his father, Mithridates I Callinicus (see here), and the incredibly well-preserved Roman Bridge at Cendere erected by four Commagene cities around AD 200 in honour of the Emperor Septimius Severus, his wife Julia Domna and his sons Caracalla and Geta (see here). 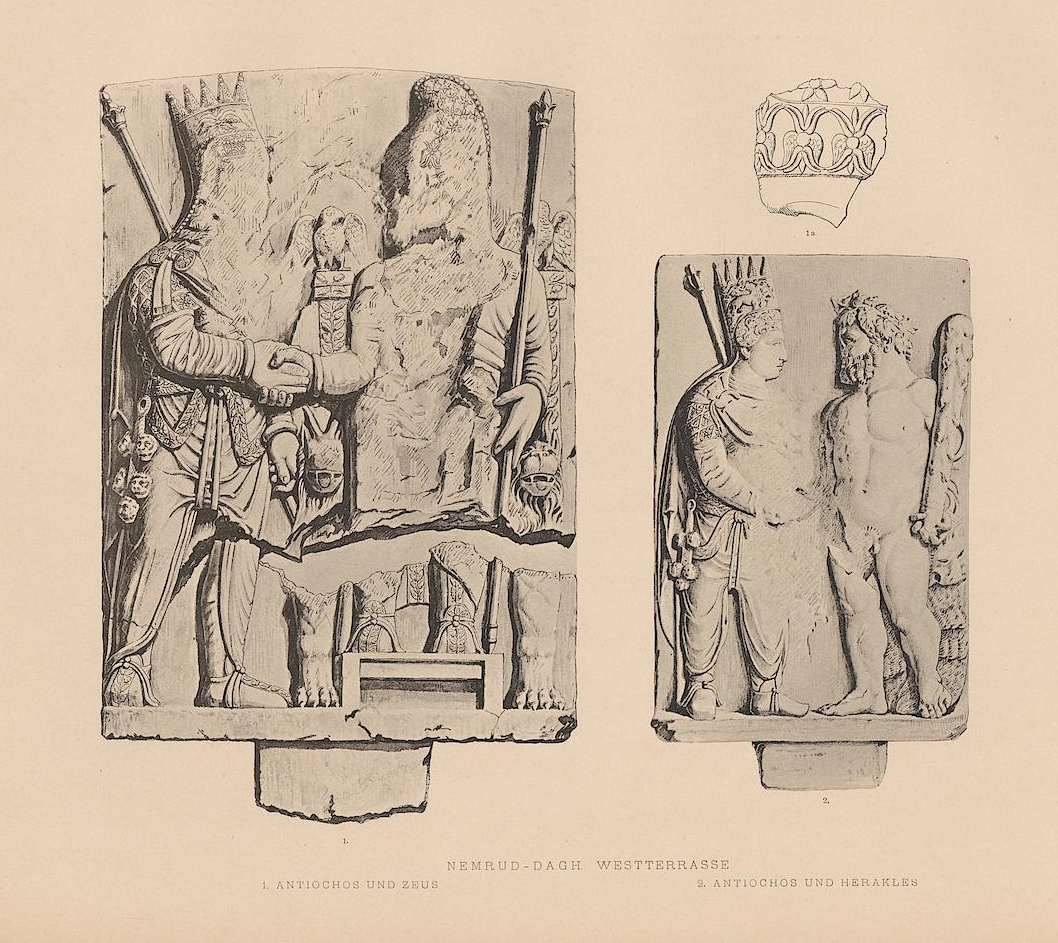