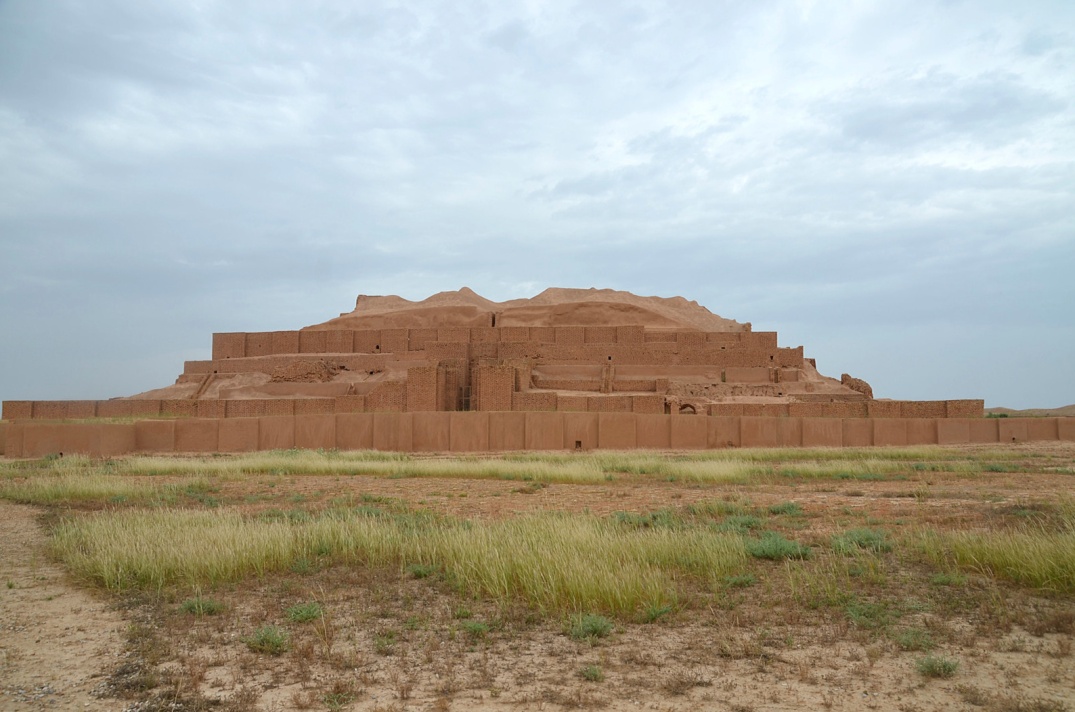 Chogha Zanbil is a magnificent, 3300-year-old ancient Elamite complex located 30 kilometres south-east of the ancient city of Susa in the Khuzestan province of western Iran. The principal element of this complex is an enormous brick ziggurat, a large stepped pyramidal temple dedicated to the Elamite divinity Inshushinak, the protector and patron god of Susa. The Chogha Zanbil ziggurat is considered to be the best-preserved of its kind and the ﬁnest surviving testimony to the once-great Elamite civilization. In 1979, Chogha Zanbil became the first Iranian site to be inscribed on the UNESCO World Heritage List.

Chogha Zanbil was founded around 1250 BC by the Elamite king Untash-Napirisha as the religious centre of Elam. Its original Elamite name was Dur Untash, a combination of Elamite Dur, meaning place/resident/city, and Untash the Elamite king who built it. The majority of people who lived there were probably either priests or their servants.

The complex of Chogha Zanbil occupied a total area of 100 hectares and consisted of a large, five storeys high stepped pyramid temple, monumental palaces, temples and tombs made from thousands of mud bricks of the same dimensions. Three concentric enclosure walls protected the whole complex with an outer wall of about 4 kilometres in circumference. The inner zone was centered on the ziggurat and included a series of temples as well a large open courtyard. This central zone was enclosed by a wall that originally measured 520 metres and had six gates. The middle zone (temenos), which held eleven temples dedicated to lesser gods, was also surrounded by a wall that originally measured 1,625 metres long and 10 metres high. Four gates led from the temenos to the outer zone which had royal palaces and a funerary palace containing five subterranean royal tombs.

The imposing ziggurat originally measured 105.2 metres on each side and about 53 metres in height, over five levels, and was crowned with a temple dedicated to Inshushinak. A single stairway in the middle of each of the ziggurat’s four sides led to the top of the first story. Only priests and royalty had access to the highest level. The site also featured an offering platform where bulls and goats would have been sacrificed. The ziggurat was given a facing of baked bricks, a number of which have cuneiform characters giving the names of deities in the Elamite and Akkadian languages. Every 11th row of outer bricks was stamped with an inscription. Only the few scribes would have been able to read them.

I, Untash Napirisha, king of Anshan and Susa, constructed the holy city of Untash Napirisha in which I built a golden temple tower enclosed within an inner and outer wall. I dedicated the city to Napirisha and Inshushinak. May these gods accept this, the fruit of my labor, as an offering.
— Inscription from Chogha Zanbil

The complex was built on high ground, more than fifty metres above the nearby river Eulaeus (Dez), which made it difficult to bring water to the city. According to some scholars, Elamite architects and engineers constructed a long canal to supply the city with water. An ingenious system of reservoirs then distributed the drinking water throughout the city. To protect the ziggurat from torrential rainfalls and the inherent fragility of the bricks, the Elamite builders integrated a sophisticated drainage system in the ziggurat’s overall design.

Although construction in the city abruptly ended after Untash-Napirisha’s death, the site was not abandoned but continued to be occupied until the Assyrian king Ashurbanipal destroyed it in 640 BC.

Choga Zanbil was discovered in 1935 during an aerial photography campaign conducted by geologists searching for oil in the region. The French archaeological team working in Susa
was informed of the discovery and identiﬁed the site as the sacred city of Dur Untash described on brick inscriptions found locally. It was at this time that Dur Untash was named Chogha Zanbil, meaning “basket mound” reflecting its shape. Choga Zanbil was excavated and restored in nine seasons between 1951 and 1962 by the distinguished French archaeologist Roman Ghirshman. Subsequent conservation work carried out by Iranian teams centered on the repair of the ziggurat.

One thought on “Chogha Zanbil”