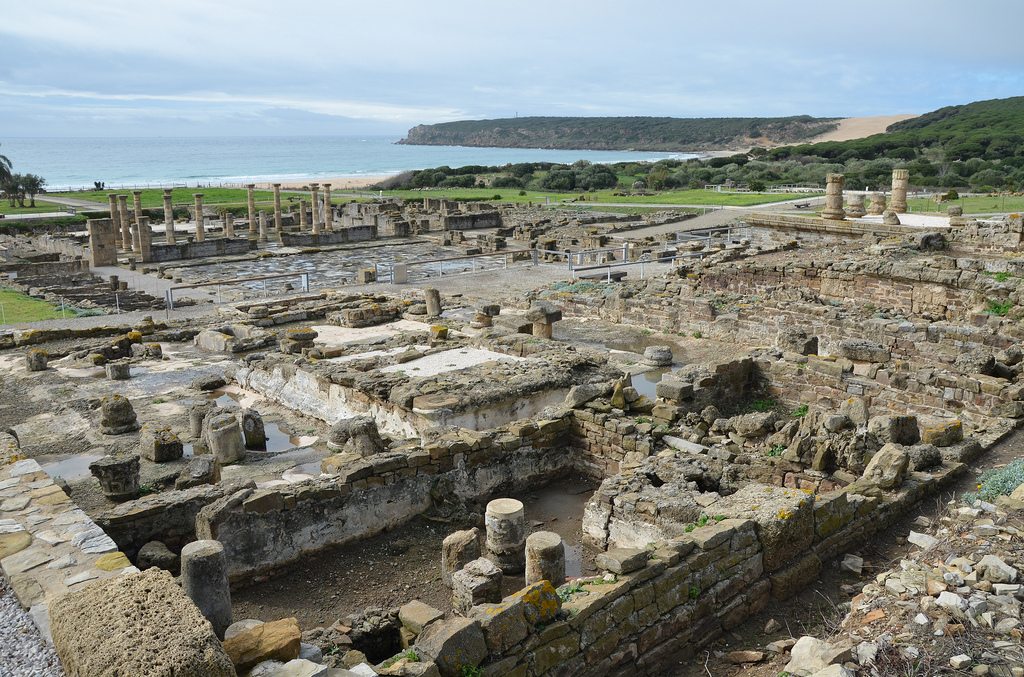 Baelo Claudia is an ancient Roman city lying on the shores of the Strait of Gibraltar in southern Spain. It was settled at the end of the 2nd century BC, and its history and subsequent development are closely associated with the salting industries and its maritime communication with North Africa. The ruins of Baelo Claudia with its theatre, temples, forum and basilica, and especially its large fish-salting factory testify to the city’s glory as an important and successful trading centre.

The Roman army landed on the shores on the Iberian Peninsula towards the end of the 3rd century AD in an attempt to halt the advancing Carthaginians with whom they were engaged in a dispute for the control of Western Mediterranean. The Roman victory at the Battle of Ilipa in 206 BC signified the end of the Second Punic War (218-202). The whole area was annexed under Augustus and became the most romanised province in the Peninsula.

According to the oldest archaeological finds on this site, the prosperous city of Baelo Claudia was founded towards the end of the 2nd century BC. As shown in the legends of its Republican coins, the city was first known as Bailo. The abundance of fish in the Strait of Gibraltar facilitated the settlement of the coast and the exploitation of resources from the sea. During this period the fish salting industries were established, and the city’s strategic position facing the North African coast led to its expansion as a trading centre.

Around the dawn of the new era, the city experienced a period of urban expansion while the first salting industries were rebuilt and made larger. Its strongest development was under the rule of Emperor Claudius (41-54 AD) who raised the city to the level of a Roman municipium with Roman rights. It was also at this time that Baelo received the name of Claudia. During this time the city acquired a large forum with monumental public buildings, three aqueducts guarantying water supply to the population and two factories for the production of garum (fish sauce). The city walls that had been built a few years before during the reign of Augustus were also completely rehabilitated. The economic peak was maintained well into the 2nd century AD.

However, the economic activity started to decline at the beginning of the 3rd century AD, perhaps due to a major earthquake that took place at the time and that may have destroyed most of the city. Also, the general socio-economic crisis that occurred in the empire during the 3rd century may have affected trade and commerce. The city experienced a slight recovery later in the century, but by the 7th century, the town was abandoned.

The excavations at Baelo Claudia have revealed the most comprehensive remains of a Roman town in the whole of the Iberian Peninsula. The site contains all the representative elements that make up a Roman city; the forum, temples, basilica, administrative buildings such as the curia, the market place, theatre, baths, industrial zone, aqueducts. A modern Visitor Centre showcases many artefacts and offers a comprehensive introduction to the site.

One thought on “Baelo Claudia”