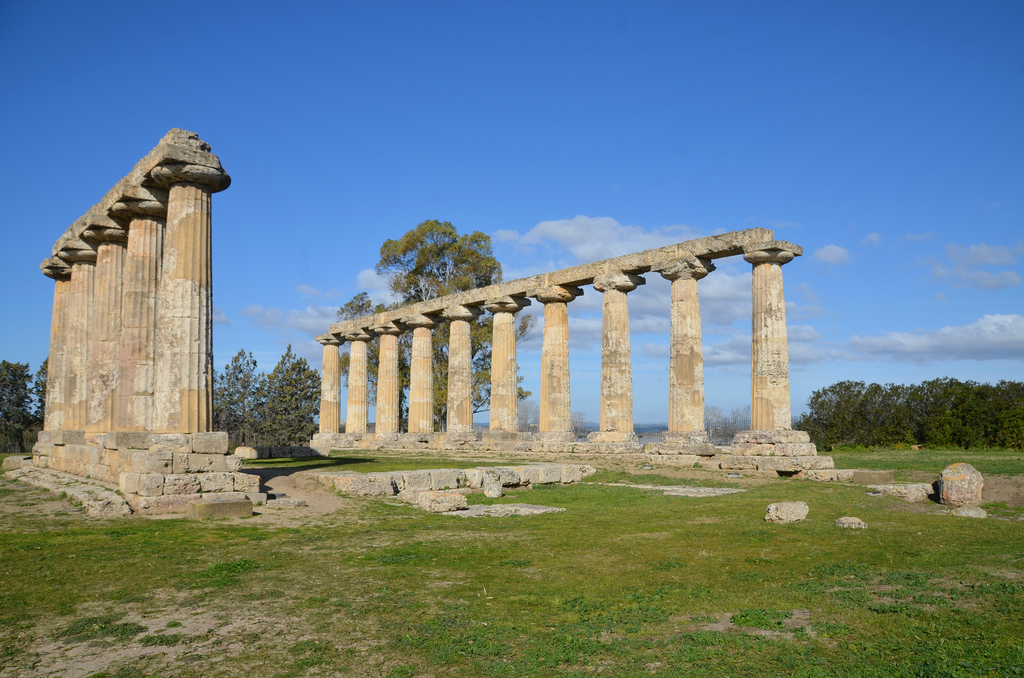 Metapontum was an ancient Greek city founded by Achaeans in the late 8th or 7th century BC along the Gulf of Tarentum near the mouth of the Bradano River. It is located in modern Metaponto on the southern coast of the Basilicata region of Italy, 50 kilometres to the west of Taranto. Renowned for the fertility of its farmland, Metapontum thrived on agriculture and trade, and the city became one of the most prosperous colonies in Magna Graecia. Today, the best surviving evidence of Metapontum’s prosperity is an elegant Doric temple of the 6th century BC dedicated to Hera. An archaeological park has remains of temples and buildings which stood in the central sanctuary complex, while the nearby National Museum of Metaponto contains the rich heritage of archaeological materials found in the Greek colony.

Founded by an Achaean colony from Sybaris and Croton around 700 BC, Metapontum was part of the wave of Greek colonization from the 8th century BC onwards that spread up along the coast of southern Italy. Fertile farmlands surrounded the ancient coastal city and thus became a prosperous trading colony exporting wheat in exchange for olive oil and wine. The earliest coins from Metapontum were stamped with an ear of wheat and the Metapontines sent to the temple at Delphi an offering of a golden harvest. Metapontum was the last home and burial place of the philosopher Pythagoras.

In is prime, Metapontum had at least 20,000 inhabitants as well as 10,000 neighbouring farmers. It covered an area of about 150 hectares and was protected by an encircling fortification wall. The city had a rectangular plan and consisted of the sanctuary and the Agora, situated beside each other at the southern extremity of the urban space. The sacred area had some of the city’s most important buildings, including five Archaic temples dedicated to Hera, Artemis, Apollo and Athena, and an ekklesiasterion (assembly place) located in the north-east of the agora. The ekklesiasterion was later transformed into a theatre with a cavea, a semi-circular orchestra, and a free-standing stage building that could seat ca. 7500-8000 people.

The finest surviving temple, however, lies outside the city limits. Known today as the Palatine Tables (Tavole Palatine), this is an elegant Doric temple erected in the late 6th century BC and dedicated to Hera (as indicated by the votive deposits). Fithteen columns of the colonnade (6 x 12 columns) are still standing.

The city declined after 207 BC when its inhabitants, who had supported Hannibal following his victory at the Battle of Cannae, followed the defeated Carthaginian general in his retreat. Spartacus marched on Metapontum with his army in the winter of 73-72 BC and wrecked the city. Archaeology has shown that a stoa (portico) was destroyed during this period. Metapontum was considerably deserted by the end of the 3rd century BC. By Pausanias’ time in the 2nd century AD, the city was in a state of ruin, with little more than its damaged theatre and walls surviving.

Since 1964 Metapontum has been the subject of intensive archaeological research. Excavations and extensive studies have allowed archaeologists to identify and outline the ancient town planning, from its foundation in the 7th century BC until the Roman conquest and the subsequent gradual abandonment in the late imperial age. However, only 2% of the site has been excavated.