Pompeii was a large Roman city in the Italian region of Campania which was destroyed, together with Herculaneum, Stabiae, Oplontis and other communities, by the violent eruption of Mount Vesuvius in AD 79. Buried for centuries beneath tons of volcanic ash and debris, Pompeii was finally re-discovered late in the 16th century, offering an invaluable insight into the Roman world. Pompeii is a UNESCO World Heritage Site and is one of the most popular tourist attractions in Italy, with approximately 2.5 million visitors annually.

Thanks to its strategic position near the Sarno River, Pompeii was an important commercial centre, a trading hub noted for exporting goods such as olives, olive oil, wine and fish sauce (garum). Once home to approximately 12,000 people, the city boasted an assortment of baths, houses, temples, public buildings, markets, brothels, taverns and cafes, and a 20,000-seat arena. Probably originating from an amalgamation of five small towns, Pompeii’s first city plan developed in the 6th century BC when Italic people called the Oscans inhabited the area.

Over the next centuries, the city fell to the Greeks and the Samnites before becoming a Roman colony in 80 BC. Pompeii prospered until it was struck by a massive earthquake in AD 62, damaging most of its buildings. The fatal blow came upon the city in AD 79 when Mount Vesuvius violently erupted.

The powerful eruption completely smothered the cities on the foothills of Vesuvius. The volcano, which had been dormant for hundreds of years, erupted with tremendous force sending a tall mushroom cloud of rock and gas over 30 km into the sky. The cloud then collapsed and triggered a massive pyroclastic surge down the slopes of Vesuvius, killing everyone who had not yet fled. At Pompeii, most of the houses lay under a blanket of pumice and ash up to 5 metres deep. It would be some 1700 years before these Roman cities were rediscovered by archaeologists, and the extent of their preservation was extraordinary.

After its catastrophic demise, centuries of history were sealed away until 1594, when an architect stumbled across the ruins while digging a canal. However, it wasn’t until the appointment of archaeologist Guiseppe Fiorelli in 1861 that systematic excavations were undertaken. Fiorelli was responsible for making the famous plaster casts of the victims of the eruption which you can now see around the site. Of Pompeii’s original 66 hectares, 44 have now been excavated, and excavations are continuing to this day.

270 years after the discovery of Pompeii, large scale archaeological excavations have resumed in Pompeii in part of Regio V, an area of over 1,000m² that was still buried under volcanic debris. More than 200 experts and technicians are at work on the Great Pompeii Project, the €105 million conservation, maintenance and restoration program launched in 2012 and largely funded by the European Union. New structures (including a brightly coloured snack bar), colourful frescoes and mosaics of mythological figures, and historic graffiti were among the discoveries emerging from the archaeological dig. Pompeii has come a long way since UNESCO threatened Italy to take it off its World Heritage list. The threat followed several incidents that caused international alarm, including the collapse of the School of Gladiators and several walls in 2010 and 2011.

Another recent discovery was the scrawled piece of text on a wall of a house suggesting that the eruption occurred in October of AD 79, two months later than previously thought. According to Massimo Osanna, the head of the Pompeii site, the correct date of the eruption may, in fact, be 24 October. After almost two millennia, the ruins of Pompeii continue to astound us with its rich archaeological legacy. The new excavation areas are yet to open to the public.

Since the first planned excavations in the mid-18th century, Pompeii has astonished scholars and tourists alike. Its ghostly ruins make for one of the world’s most gripping and exhilarating archaeological experiences. 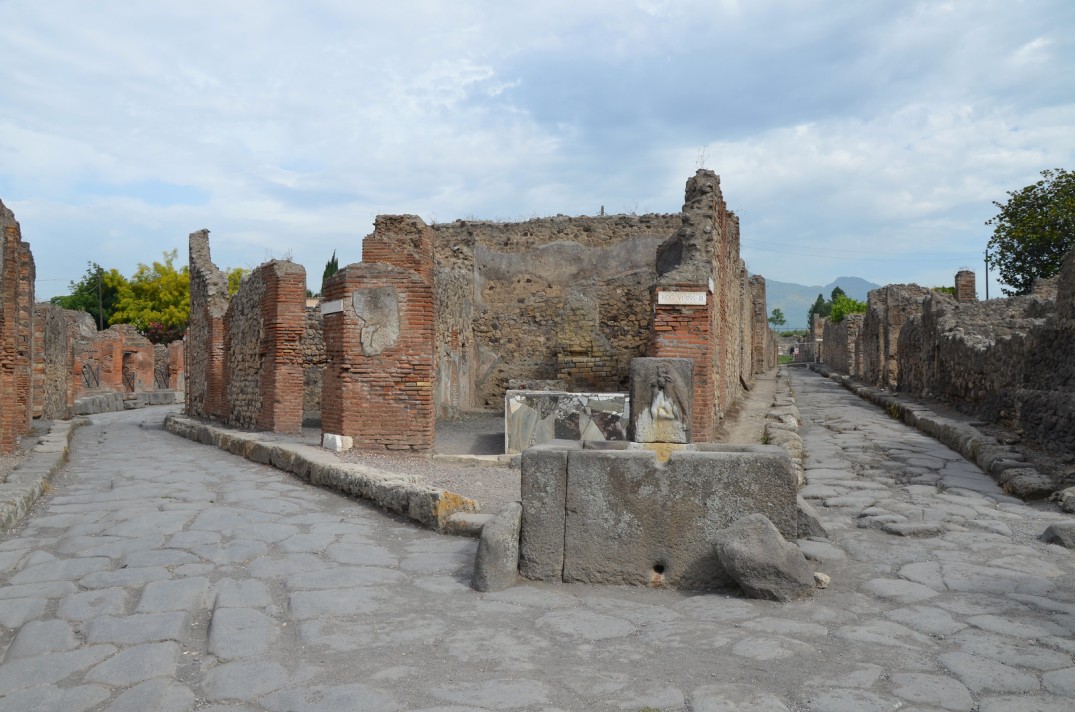 Outside the City Walls 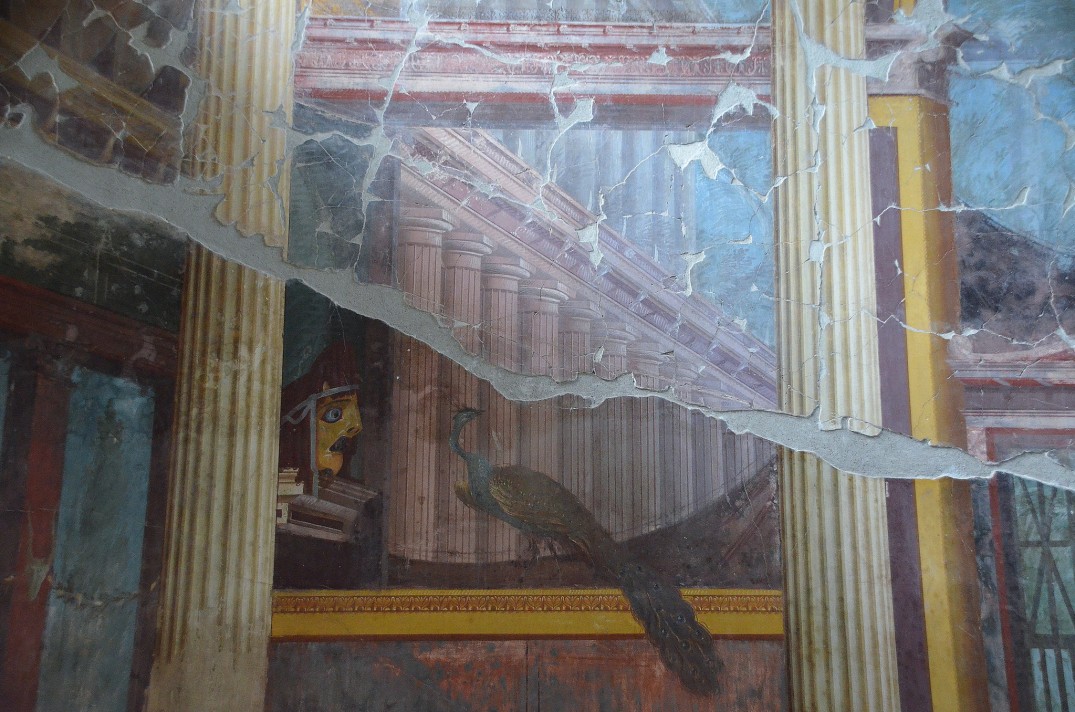 Located just five kilometres from Pompeii, the so-called Villa Poppaea at Oplontis in the modern city of Torre Annunziata is one of the finest examples of aristocratic Roman residences. Renowned for its magnificent frescoes and its majestic position overlooking the coast of Campania, Villa Poppaea was apparently owned by Nero’s second wife, Poppaea Sabina. The villa was badly damaged in the AD 62 earthquake and then destroyed by the volcanic eruption of Mount Vesuvius in AD 79. It was declared World Heritage by Unesco in 1997 along with Pompeii and Herculaneum.

The name of Oplontis is found on the Tabula Peutingeriana, a medieval copy of an ancient map of the roads of the Roman Empire. It was part of the suburban area of Pompeii on which it depended administratively. The Villa Poppaea was built in two main phases. The oldest part of the building dates back to about the middle of the 1st century BC and was organised around a Tuscan atrium with magnificent paintings in Second Pompeian Style with illusionistic depictions of architectural elements and views of landscapes. The villa overlooked the sea to the south with a large peristyle and a large garden (viridarium) with porticoes to the north. Around the atrium were sumptuously decorated rooms for resting, dining and sitting.

The complex was later extended to the east. This new wing housed several reception and service rooms set in extensive gardens overlooking a vast swimming pool (61×17 metres). A large portion of the sculptures that decorated the villa were found around the swimming pool. These improvements were ongoing at the time of Vesuvius’s eruption.

According to an inscription on an amphora that refers to one of Poppaea’s slaves or freedmen (“SECUNDO POPPAEAE”), the villa may have belonged to the family of Nero’s second wife (the gens Poppaea).

After the Vesuvius eruption, the villa lay for centuries beneath six metres of layers of lapilli and ashes and then a thick layer of mud. It was first discovered in 1590 during the construction of the Sarno Canal which cut through the central hall of the villa. However, little was done at that time to explore the site further. The excavations of the site restarted between 1839 and 1840 and were undertaken by Bourbon excavators. Due to lack of funds, work was again suspended, and it was not until the mid-1980s that systematic excavations finally started on a full scale uncovering about 60% of the villa. More than one hundred rooms have been excavated so far.

A large number of artefacts from Oplontis are preserved in the Naples National Archaeological Museum. 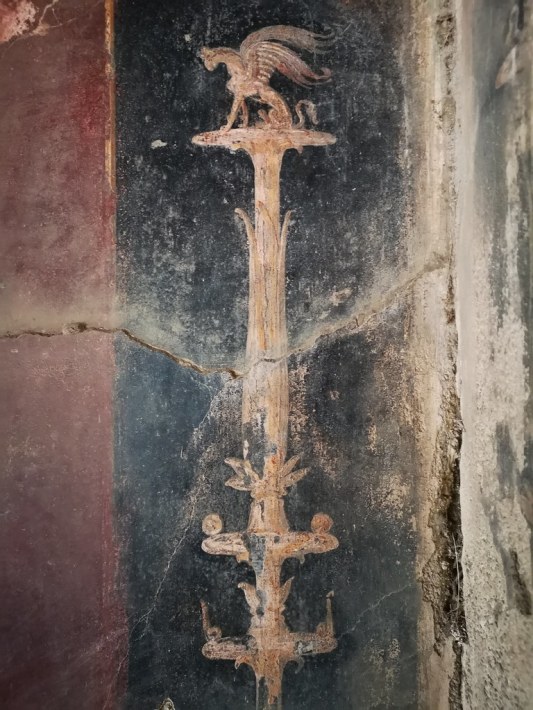 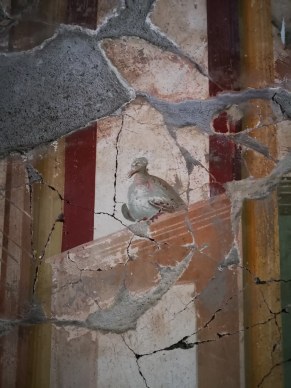