Terracina is a picturesque town on the Tyrrhenian coast situated approximately half-way between Rome and Naples. Legend has it that Odysseus sailed here on his travels and surrendered to Circe’s enchantment. Circe is said to have lived on Mount Circeo, a promontory stretching-out into the sea best visible from Mounte San’t Angelo above the town of Terracina. Nowadays the area is called the Riviera of Ulysses. 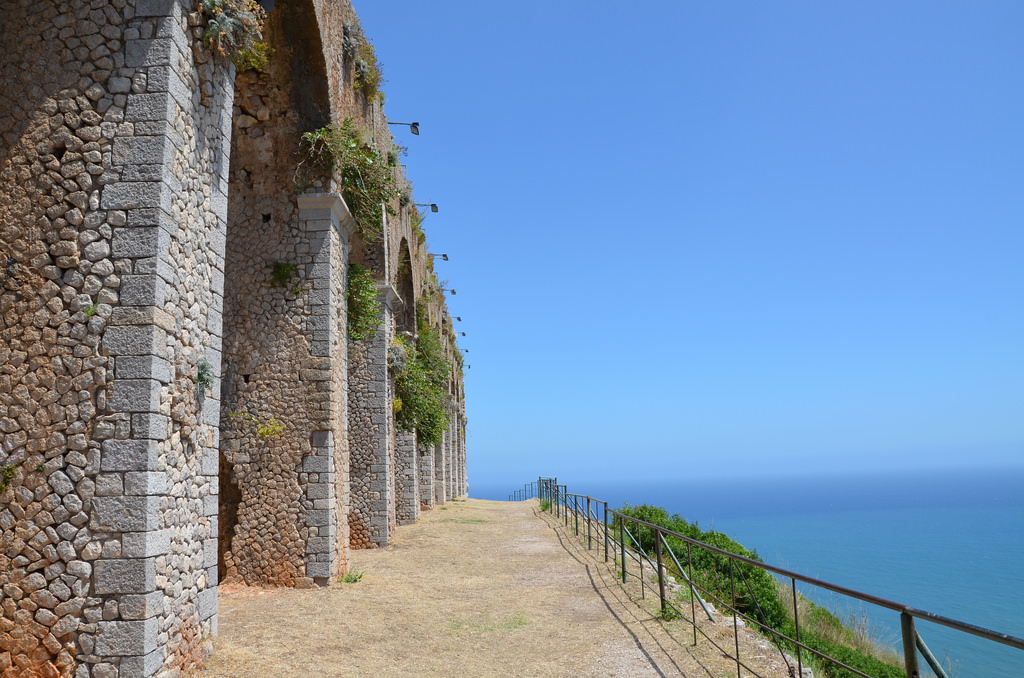 After occupation by the Ausoni, Terracina was taken over by the Etruscans, followed by the Volsci in the 5th century BC who called it Anxur and made it a fortress against the Romans. In 329 BC, however, the city became Roman under the name of Colonia Anxurnas. It was later renamed Tarracina. A few years later, the Via Appia joining Rome with Capua was built, climbing to Tarracina on its way South.

Tarracina experienced a long phase of intense building from the time of Sulla (c. 138 BC – 78 BC) to Trajan and Antoninus Pius. Much of the acropolis development dates to the time of Sulla, including the Forum Aemilianum. It was  named after Aulus Aemilius, a local wealthy man who ordered its construction.

Many Roman ruins were brought to light only after the World War II bombings. These include a quadrifrons arch, which served as entrance to the forum. Under it is a well-preserved stretch of the ancient Via Appia. The present Piazza del Municipio lays over the ancient forum. Its pavement is well preserved and it is still possible to see the inscription ” A. Aemilius A. F. Stravi(t)” in letters which were once filled in with bronze. At the north end of the forum, the 11th century cathedral (consecrated to San Cesareo in 1074) is built upon the site of a temple identifiable as the Temple of Rome and Augustus whose column drums were reused in the building.

The Sanctuary of Jupiter Anxur is perhaps Terracina’s most famous historical site. It dates back to the fourth century BC, although much of the development belongs to the first century BC at the time of the Roman general Sulla. Built on Mount Saint Angelo (known as Mons Neptunius in the Roman era), about 270 metres above sea level, the complex is large and spectacularly sited, dominating the shoreline and sea. From here one can admire the extraordinary panorama, which to one side gives onto Mount Circeo, on the other, onto the Fondi Plain.

The most impressive remains are those of the underground passageway, the cryptoporticus, resting on twelve massive arches in opus incertum on the south and west sides.