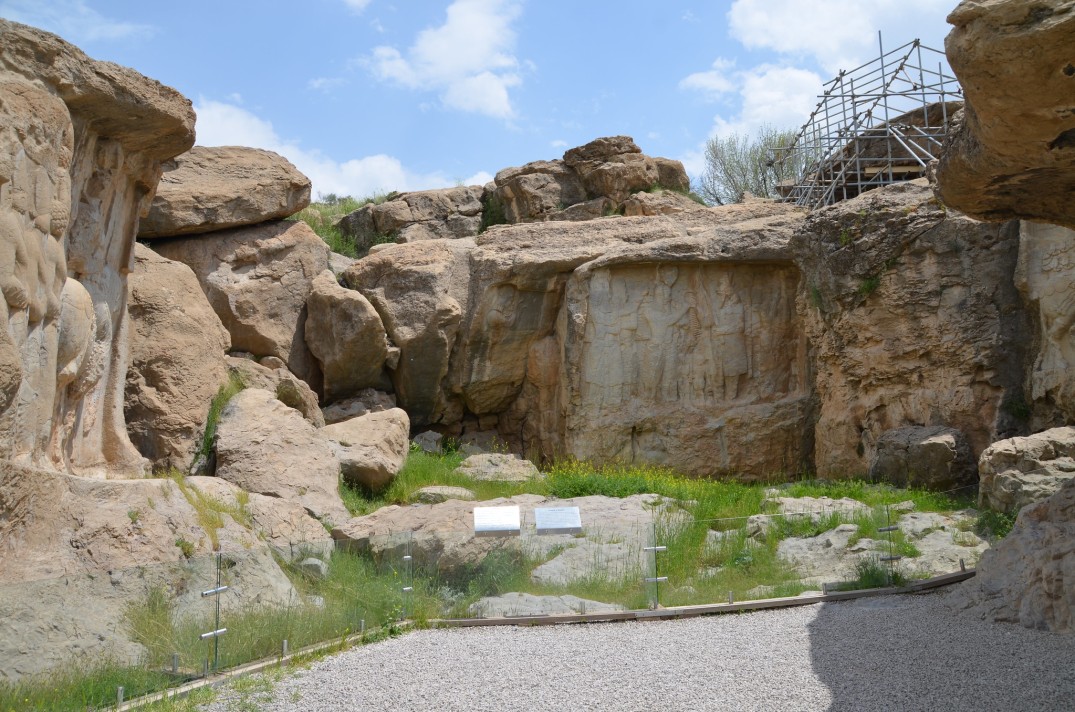 Naqsh-e Rajab is the site of four limestone rock-cut bas-reliefs from the early Sassanid era, located about 9 km north of Persepolis in the Fars Province of Iran. Together with Naqsh-e Rostam, which lies 2.5 km away, Naqsh-e Rajab is part of the Marvdasht cultural complex. The two sites are a tentative candidate for UNESCO World Heritage status.

One of the carvings is depicting the investiture of Ardashir I (r. AD 224-240/1), the founder of the Sassanid dynasty. The second shows the investiture of Ardashir’s successor, Shapur I (r. AD 240/2-270). A third bas-relief, known as ‘Shapur’s Parade’, depicts the king on horseback. A fourth bas-relief and inscription is attributed to Kartir, the Zoroastrian high priest under Shapur I and his sons Hormizd I (r. AD 270-273) and Bahram I (r. AD 273-276). 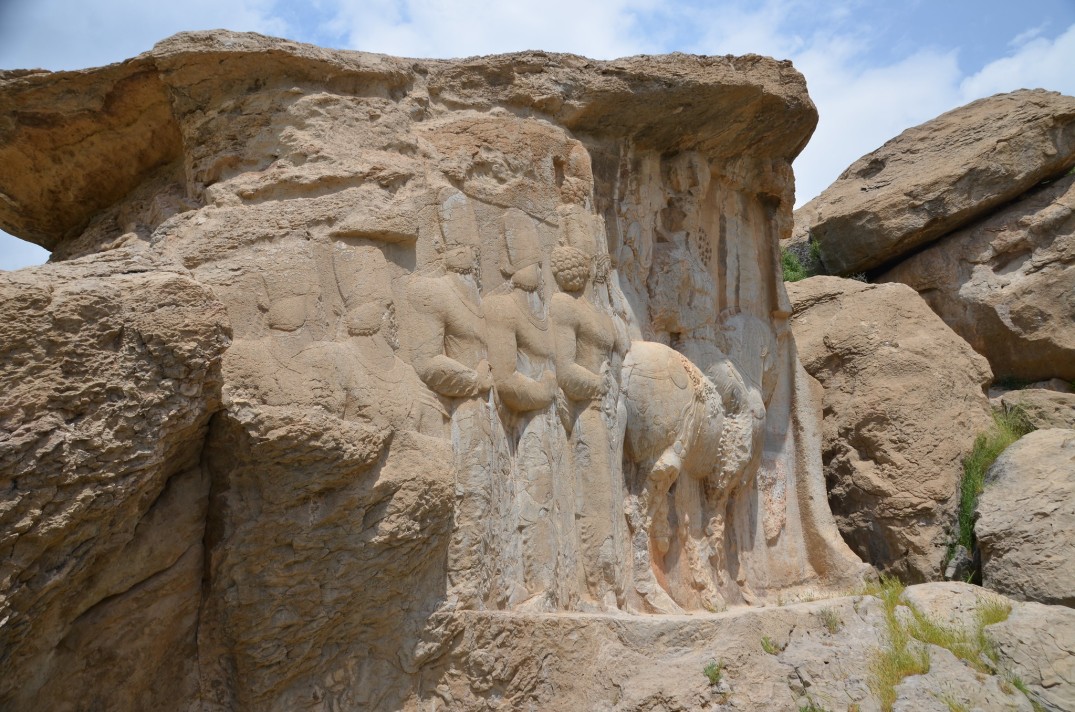 Firuzabad is a city in the Fars Province of Iran, situated about 110 km south of Shiraz. It is the location of the circular citadel city of Gur, the first capital of the Sassanid Empire. The capital is said to have been constructed by Ardashir I, the first king of Sassanid dynasty, on the site of an Achaemenid city destroyed by Alexander the Great, as a circular town with gates at the four cardinal points. Firuzabad was declared a UNESCO World Heritage site in June 2018 as part of the Sassanid Archaeological Landscape of Fars Region.

The ensemble at Firuzabad comprises, within a 14 km diameter area, of a monumental memorial to the founder of the Sassanid state with archaeological sites including the ancient city of Gur, the Palace of Ardashir, the Qal’eh Dokhtar fortress and reliefs from the time of Ardashir, as well as the 5th-century Pahlavi inscription and bridge of Mihr Narseh (see here). Fifty kilometres away from Gur, south of modern Kavar, stands a 125-meter-long bridge spanning the Qara Aqaj River. It was built on arches during the time of Ardashir, probably by Roman engineers. This ensemble embodies the political, historical, cultural and artistic developments of the early Sassanid period. Gur and its surrounding structures, were part of the Ardashir-Khurrah (“Glory of Ardashir”), one of the five administrative divisions (kūra) of the Fars province of Iran.

Ardashir’s new city covered a perfect circle 2 km in diameter and was divided into 61 sectors by 20 radial walls and three concentric circles. It was also protected by a trench 50 meters in width. At the centre of the town, there was an elevated platform or tower, called minar. About two kilometres away from Gur, the Palace of Ardashir stands on the bank of the western branch of Tangab river. The structure consisted of several parts opening to a garden with a pool and contained three domes, resembling the Parthian palace at Ctesiphon. Although some sources state that the capital was established after Ardashir’s victory in 244 over the Parthian king Artabanus V, archaeological evidence confirms that it was established before the battle.

The Qal’eh Dokhtar fortress stands atop the mountain adjoining the river, four kilometres away from the palace of Ardashir. At the foot of the Qal’eh Dokhtar fortress are the remains of a Sasanian bridge, and on its opposite body a bas-relief depicting the crowning of Ardashir (see images here), the Pahlavi Sasanian inscription of Mihr Narseh (see image here), from the time of Yazdgerd II, and at a small distance, the bas-relief depicting the victory of Ardashir over Ataban V, the last Parthian king (see images here). 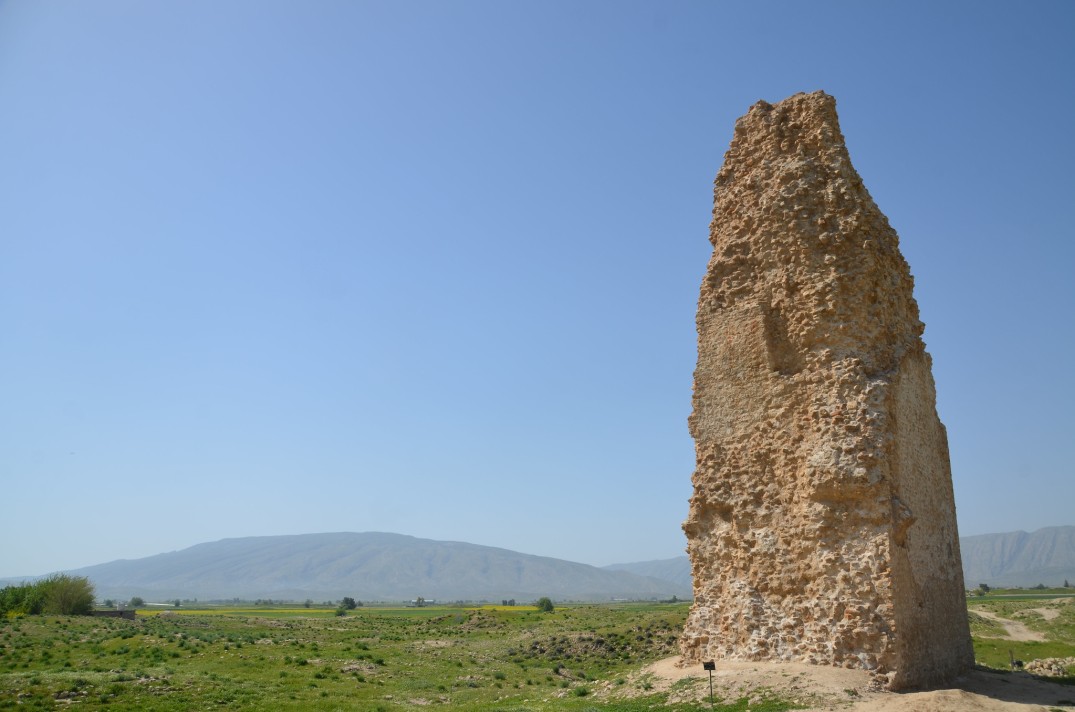 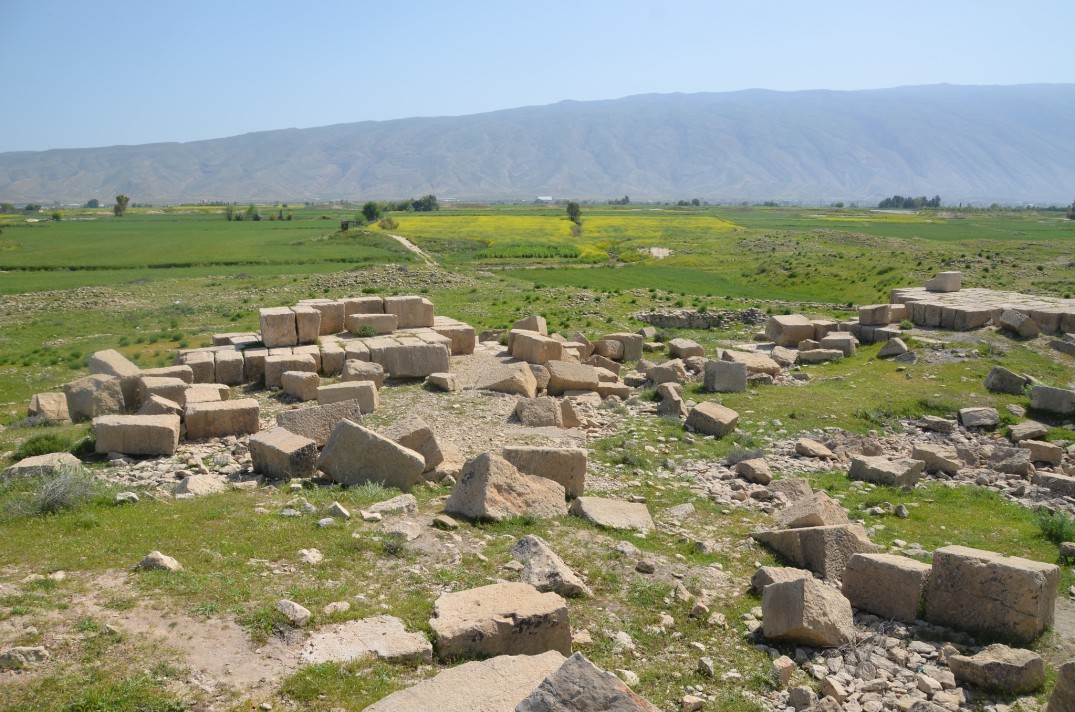 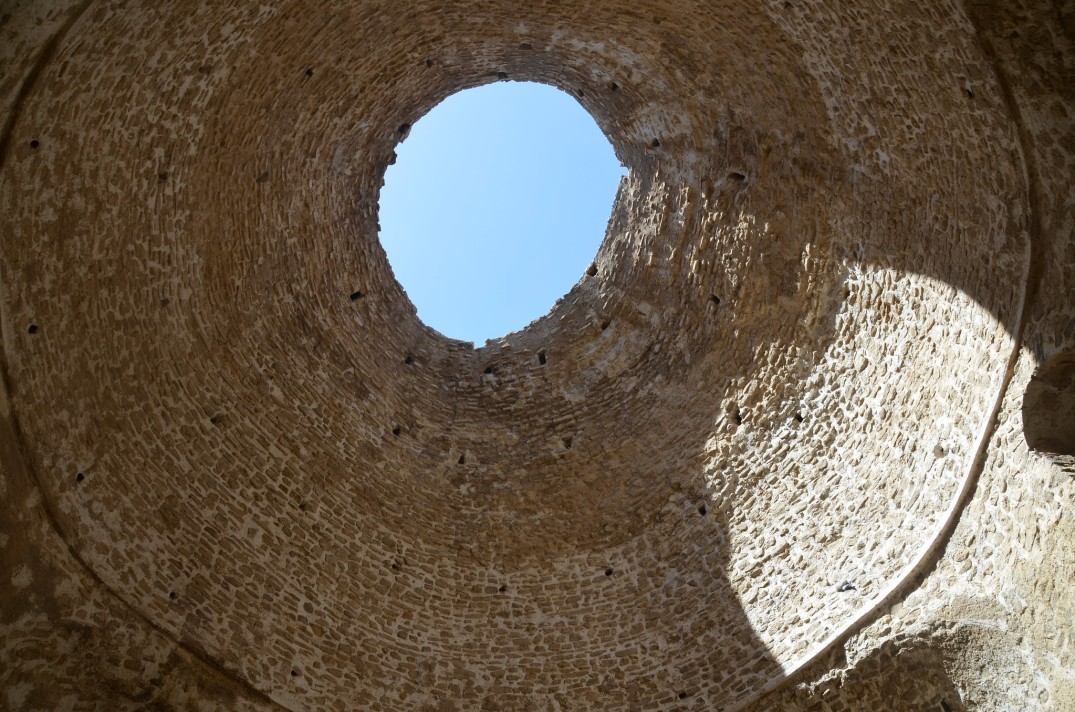 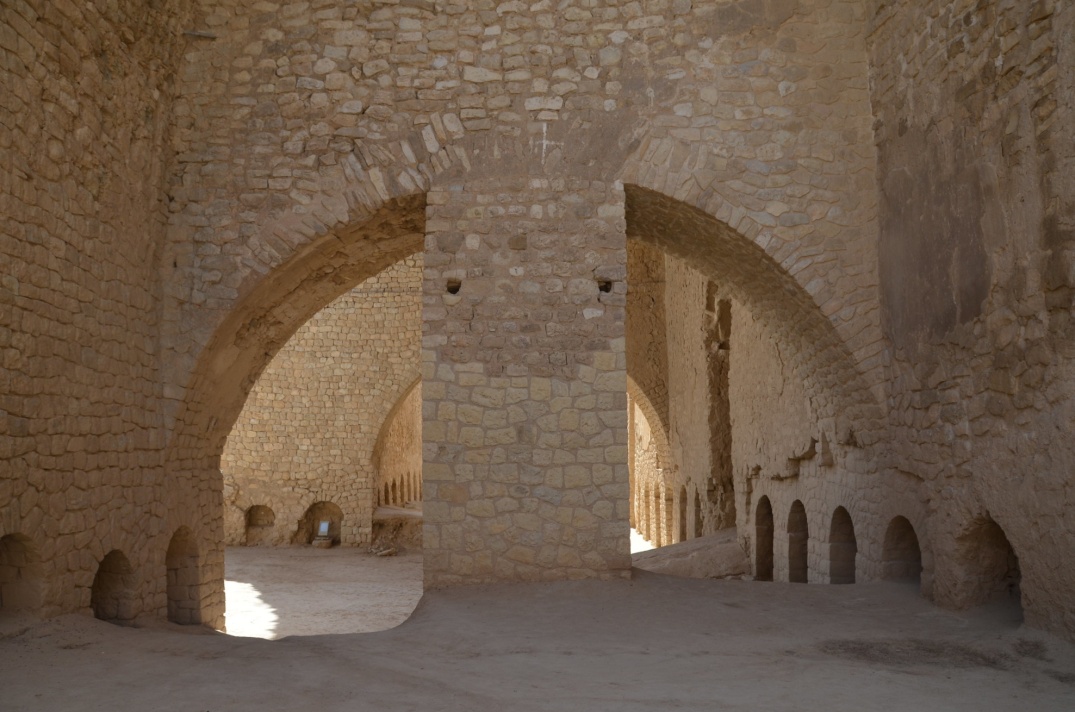 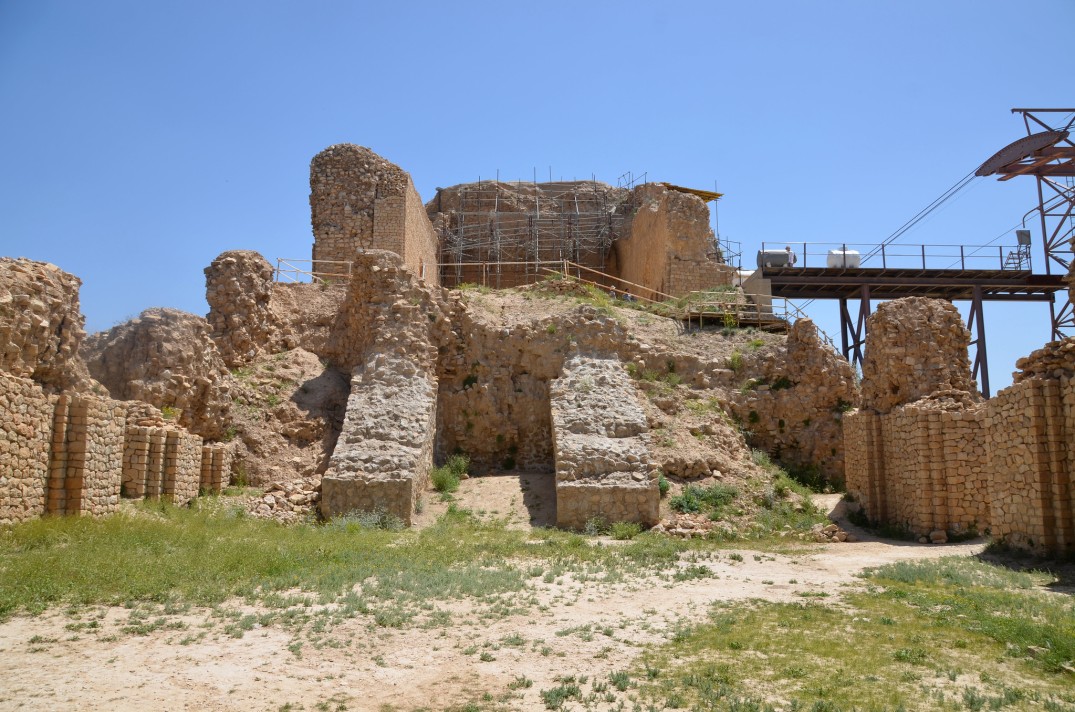