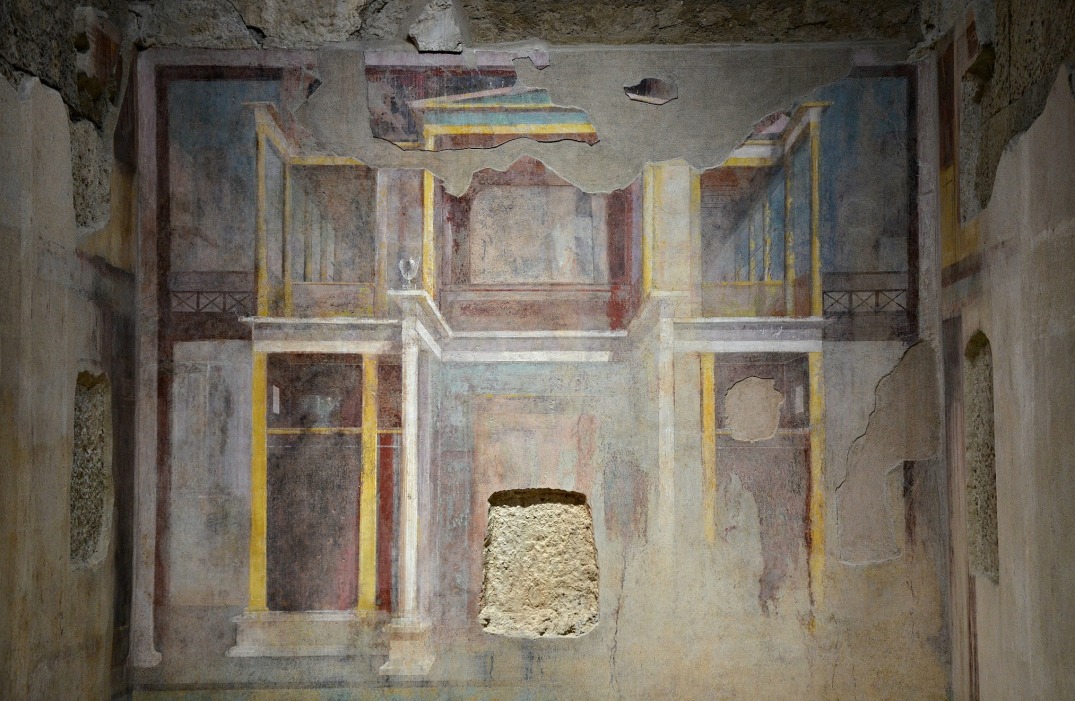 The House of Augustus (Domus Augusti) was the home of Rome’s first emperor and was located on the most sacred area of the Palatine next to the Temple of Apollo. In fact, the house must have stood above the Lupercal, the sacred cave where, according to legend, the twin founders of Rome were suckled by the she-wolf. Augustus’ domus, comprising two levels, served as his primary residence during his reign. Despite its relatively small size, the House of Augustus is celebrated for its lavish Second-Style Pompeian frescoes which rank among the best in the Roman world. The Second Pompeian style, or “Architectural Style”, began in Rome in the early years of the 1st century BC and evolved during the reign of Augustus. This period saw a focus on architectural features and trompe-l’oeil compositions.

Augustus originally obtained the property from the orator Quintus Hortensius. He expanded the layout after his victory at Actium. Some of the rooms containing the most spectacular wall paintings are known by their recurring motifs: the “Pine Room” (room 6), the “Room of the Masks” (room 5), the “Room of the Perspective Paintings” (room 11). The first two rooms were domestic cubiculae (bedrooms). They occupied the western section of the house. The third room, identified as an ala (wing) flanking the tablinum (of which nothing of its decoration is preserved), served a more overtly public function and was located around the northern peristyle courtyard. But the most refined and elegant decoration can be seen in the so-called “Emperor’s Study” (room 15) which has no equal anywhere else in Rome.

The tour of the domus begins with the two cubiculae in the domestic section of the house (rooms 6 and 5). The “Pine Room” has a simple architectural scheme with pine festoons over the top of which are porticoes with Doric columns. The “Room of the Masks”, located just behind the “Pine Room” and slightly larger in size, is one of the finest in Augustus’ house. It has more elaborate perspectival Second-Style paintings incorporating tragic and comic theatre masks.

Next to the two cubiculae is a series of five rooms of various sizes arranged along the north side of the western court. The rooms include two libraries (or maybe rooms to display artworks), and a tablinum (where Augustus would receive guests) flanked by two alae (wings) on either side. One of the two alae, dubbed “Room of the Perspective Paintings”, has vividly-coloured frescoes on its north wall depicting a two-storey architectural facade in blue, white, yellow and red.

The path continues with the visit of the eastern section of the house, where rooms are preserved on two storeys. The upper room was originally joined by a corridor ramp (room 12). The most striking feature of the so-called “Ramp Room” is the painted vaulting in imitation of real coffering which is decorated with a painted pattern of rhomboidal and square coffers containing rosettes.

The next room is the so-called “Large Oecus” (room 13) with architectural wall paintings with four pedestals for columns of piers (oecus tetrastilus – supported by four columns). Among other functions, the room served as a salon where elaborate dinner parties were staged.

The final room, a cubiculum known as “The Emperor’s Study”, where the Emperor used to retire when he did not want to be disturbed. It is located on the highest level of the house. Today, it is accessed by climbing a modern steel staircase and can be viewed by peering through a protective glass. The exceptional decorative elements were inspired by Egyptian-Alexandrine models, typical of the art of the Augustan period after the recent conquest of Egypt.

Following recent conservation work, a visit to the House of Livia and Augustus can now be booked with Coopculture.it and by purchasing the new S.U.P.E.R. (Seven Unique Places to Experience in Rome) Ticket.

Unfortunately, the exquisite beauty of these frescoes could not be perfectly rendered through my photographs due to the artificial lighting in the rooms and the protective glass. If you want to see magnificent illustrations of the highest quality, I strongly recommend that you buy the magnificently illustrated book “The House of Augustus: Wall Paintings”. The book features all the wonderful fresco cycles covering the walls, from the general composition to the smallest detail.

You can buy the book on amazon.com or amazon.co.uk.

The House of Livia (domus Liviae) is a building complex on the Palatine Hill, ancient Rome’s most desirable location. It was built in the first half of the first century BC and belonged to the empress Livia, the third wife of Emperor Augustus. It stood next to the House of Augustus (domus Octaviani) alongside a complex of buildings conceived for the ideological propaganda of the emperor’s power and image. The house marks the transition between the 2nd and the 3rd architectural style of the Pompeian wall painting.

First excavated in 1839, the house has been attributed to Livia on the basis of the name IVLIA AVG[VSTA] stamped on a lead pipe on display on the left-hand wall of the tablinum. The two-storey house, built around a central atrium, was decorated with advanced “Second Pompeian Style” wall paintings, reflecting the sophisticated taste of wealthy Romans.

The remains of the house are reached by a sloping hallway whose floor is covered with a black and white geometric mosaic leading into a rectangular atrium. The best preserved section of Livia’s House consists of a rectangular atrium and three relatively large adjoining rooms (a tablinum and two side rooms). Each room was painted with a mythological subject and its floor decorated in black and white geometric mosaic.

The central room (the tablinum), also known as the “Room of Polyphemus”, was the most richly decorated. Each of its walls had a large mythological picture in the middle, set in a large columnar frame. The mythological picture on the back wall, now totally illegible, showed one of the earliest representation of the story of the monster Polyphemus and the sea nymph Galatea. It depicted Polyphemus immersed in the water with a young Cupid riding on its shoulders pursuing the nymph Galatea as she rides a sea-horse (hippocampus). Still visible however is the mythological scene on the right-hand wall of the tablinum depicting Mercury rescuing the mortal woman Io, who had been changed into a white heifer by Zeus in order to disguise his affair with her.

The decoration on the right-hand room is characterized by luxuriant festoons and garlands of fruits, flowers, branches and leaves. A yellow frieze running along the top the frescoes was filled with scenes of everyday life in Egypt (camels, sphinxes and a statue of Isis can be seen). The triclinium (dining room) is remarkable for its delicate decoration. Each wall was given an elaborate design of illusionistic architecture featuring a large picture of a sacral-idyllic landscape in the centre.

Following recent conservation work, a visit to the House of Livia and Augustus can now be booked with Coopculture.it. Tighter restrictions on the number of visitors who can access the site at any one time have been put in place and you will need to book to join the 2pm English tour which runs on Saturdays, Sundays and bank holidays. The guided tour lasts 75 minutes and accommodates a maximum of 20 people. Combined ticket for the Palatine-Roman Forum / Colosseum (valid for one entrance in the two sites for 2 consecutive days) or the Archaeologia Card (valid 7 days) have to be bought to get access to both Imperial houses.